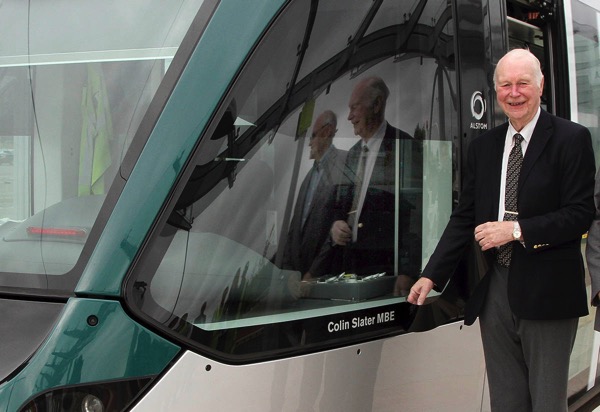 NET Marketing Manager, Jamie Swift, commented: "A total of 22 new trams have joined our expanded fleet and, in keeping with tradition, each one is being named after local people who have made their mark on our community.
"We went through a nominations process a few months ago and Colin's name was put forward on numerous occasions. It's not surprising because he's been a big part of the Nottingham scene since he moved here in the 1950s. He has legendary status as a commentator on Notts County and, as a Beeston resident, it was fitting that we could host the naming ceremony at our new Toton Lane terminus."
Cllr Jane Urquhart of Nottingham City Council said: “Colin is known and respected by many as Mr Notts County, reporting on the club’s biggest moments on BBC Radio Nottingham for over 55 years. He has also made a great contribution to the community in his role as the deputy chairman of the local Bench of Magistrates.
“I am delighted that we can pay tribute to his service by naming one of Nottingham’s new trams in his honour.”
Back

We Accept
all major debit and credit card payments